Lyon Fine Arts Museum (Musée des beaux-arts de Lyon) is one of a few places preserving Victor Tardieu’s artworks.
Montrouge Town Hall is the place Victor Tardieu executed his large painting on the ceiling.
Victor Tardieu (borned on April 30th, 1870 and died on June 12th, 1937) is a French painter. In 1924, he and painter Nam Son established the Indochina Fine Arts College (the forerunner of Hanoi University of Fine Arts).
Victor Tardieu was born in Lyon. From 1887 to 1889, he studied at Fine Arts schools in Lyon, afterwards he studied at Paris school of Fine Arts and then Bonnard’s studio during the period between 1889 and 1891.

At that time, Victor Tardieu had famous artworks including his first painting made of stained glass in the Town Hall of Dunkerque but unfortunately, it was destroyed in 1940. Now many of his artworks are displayed at Lyon Museum, Rennes Museum and Army Museum, Paris (Musée de l’Armée à Paris). At the age of 32, Tardieu won a national fine art prize for his large-sided painting (4,05 x 4,80 m) (named “Travail”) portrayed the workers on the building site. Thanks to this prize, he had a chance to travel around Europe during two years. He concentrated on drawing large ports such as Genoese, London, Liverpool with their bustling scenes expressing the prosperity in Europe in the early years of the 20th century. After that, he worked on great decorative works of Lilas Town Hall, Montrouge Town Hall and several churches in France.
During World War I, Tardieu engaged in the battle in Northern France. In 1920, he won the Indochine prize (Prix de l’Indochine) and was awarded an Indochina journey within a year.

In January, 1921, Tardieu got off the train in Marseille and arrived in Indochina. On February 2nd, 1921, Victor Tardieu went to Saigon and then moved to Southern Vietnam and Hanoi. In Hanoi, he executed a large-sided painting (77m²) for the main auditorium of Indochina University under construction. This was a beautiful architectural work of the largest university in Indochina which recently recovered and developed thanks to the education reform program of Albert Sarraut Governor. Tardieu took it 6 years to work on this painting. Additionally, he painted decorations on the wall of the front hall and the dome with a total area of 270m².

Victor Tardieu passed away in Hanoi
His artwork in the auditorium of Indochina University (it is now Hanoi University of Pharmacy, 19 Le Thanh Tong) was considered as the largest contemporary painting. With a total square size of 77m², Tardieu illustrated Hanoi’s landscape in the early 20th century with 200 characters representing the society at that time including both politicians and civilians. There were 4 Indochina Governors: Paul Doumer, Jean Baptiste Paul Beau, Albert Sarraut, Maurice Long and several leaders, teachers at Indochina University and his son – Jean Tardieu. 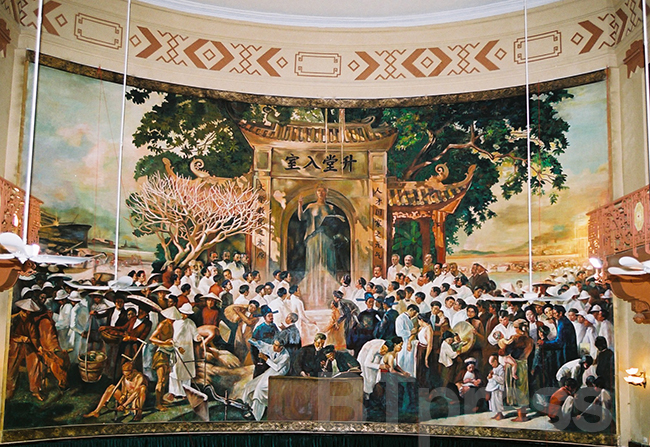 In the middle of the artwork, a triple gate like a traditional gate in the countryside in Vietnam lay under the ancient tree. The gate had four words: 升堂入室, it means “Welcome you” as a friendly reception. Being dim in the middle of the gate, Allegorie du Progres (allegory of Progress – the first image of the painter) was a character symbolizing the modern evolutionary synthesis; The image “her hand holding a book” was an emblem of the intellect. Within the large space in front of the gate, the painter painted vivid portraits of contemporary women of many classes including both the French and indigenous people. Each character had a distinct expression.
In 2006, Painter Hoang Hung with his photos of the original painting recreated it in the main auditorium at Indochina University (19 Le Thanh Tong, Hanoi.)

The Indochina Fine Arts College
At the same time, Tardieu gradually got acquainted with the life here. Thanks to his extensive relationships with senior officers, he persuaded Indochina Governor Martial Merlin to issue a decree (on October 27th, 1924) to establish the Indochina Fine Arts College, under Indochina University. In collaboration with painter Nam Son, Victor Tardieu became the first principal of this college on November 24th, 1924. Afterwards, he returned to France to recruit teachers in a few months.
At the Indochina Fine Arts College, Victor Tardieu did not impose any art genres on his students. He just passed the passion and basic painting techniques down to them, especially using oil paint.
Besides the epitome of famous Western artists, Victor Tardieu emphasizes more on the artistic tradition of Vietnam as a starting point for the development in line with the world trends. Even at the international art exhibition in Paris in 1931, these students made a strong impression on audiences and won 3 great prizes.